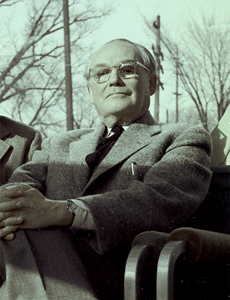 Sigfried Giedion (1888–1968) was born in Prague on April 14, 1888, a son of Swiss textile entrepreneurs. At the behest of his parents, he obtained a degree in mechanical engineering in Vienna before studying art history under the Swiss art historian Heninrich Wölfflin in Munich. Giedion served as secretary-general of the Congrès Internationaux d’Architecture Moderne (CIAM)—from the organization’s foundation in 1928 until its dissolution in 1959. In 1931, He was appointed Charles Eliot Norton Professor in Poetry at Harvard University for the academic year 1938–39. The collected lectures were published as Space, Time and Architecture in 1941. During the Second World War, he worked on the manuscript of Mechanization Takes Command (1948), one of the first attempts to document the anonymous history of industrialization. Throughout the second half of the 1950s, Giedion alternately taught at the Swiss Federal Institute of Technology in Zurich and the Graduate School of Design at Harvard. Giedion was a prolific writer and authored more than ten monographs in a half dozen languages. On April 9, 1968, he died in Zurich.