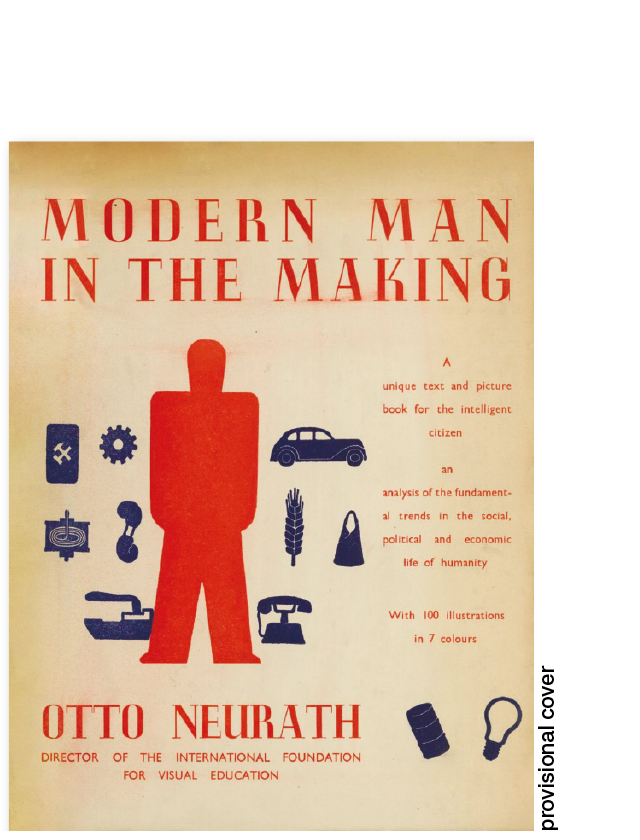 Otto Neurath’s famous Modern Man in the Making, first published by Alfred A. Knopf in 1939, captures and describes the state of the world in the 1930s by using text and figurative illustrations. From 1925 onwards, Neurath and his team had worked on a new visual language termed “Isotype” (International System of Typographic Picture Education). At a time that saw the rise of new mass media making hitherto unthinkable amounts of information available, Neurath felt the need for a systematic visualization explaining facts, statistic data and comparative numbers in simple ways. The book can be seen as one of the most infl uential predecessors of today’s ever-present infographics. Its mission was to analyze the “fundamental trends in the social, political and economic life of humanity.” The topics covered in the book include diverse social issues of the time such as mortality, health, employment, trade, education, mobility, migration and demographics.

Modern Man in the Making shows Neurath’s democratic endeavor to make knowledge intelligible and available to all. It is a reminder of graphic art’s ability to inform and create context instead of presenting aesthetic qualities only. The book has inspired generations of designers and led to sometimes peculiar imitations and further developments. This pivotal historical picture-text book
is made available again as a reprint of the original publication in the series XX The Century of Print – at a time in which new media force designers ever more so to break down complex data into easily comprehensible depictions.