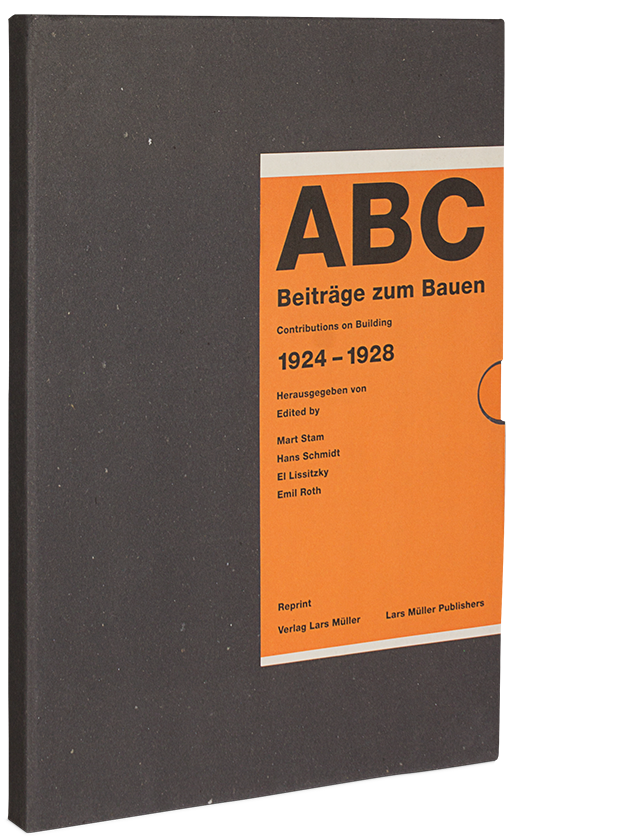 The magazine ABC, published from 1924 to1928 in Basel by Hans Schmidt, Mart Stam, El Lissitzky and Emil Roth, is an important publication of the avant-garde. ABC sought possible answers to current questions about building and provided fuel for fierce controversy. ABC cultivated the poetic chord in the manner of Mayakovsky as well as the technical-scientific essay. And: ABC loved the contradiction!

Hans Schmidt (1893–1972) was a Swiss architect and graphic designer. With numerous residential and housing estate buildings, he became a leading representative of the "Neues Bauen" movement. He was one of the founders of CIAM and co-editor of the magazine ABC.

Mart Stam (1899–1986) was a Dutch architect and designer. At the beginning of his career, he worked for Max Taut, Hans Poelzig and Karl Moser. He became known, among other things, for his backless chair model, the Freischwinger, which he first exhibited in 1927 at the Weißenhofsiedlung in Stuttgart. Together with Hans Schmidt and El Lissitzky he founded the magazine ABC.

El Lissitziky (b. 1890 near Smolensk; † 1941 in Moscow) was a Russian architect and painter, who from 1919/20 was involved with Suprematism. Between 1919 and 1927 he produced a large body of paintings, prints, and drawings that he referred to by the word Proun, an acronym for "project for the affirmation of the new" in Russian. The term Proun was conceived by Lissitzky in 1919 specifically to signify his turn to non-objective art. Lissitzky’s versatile body of work includes poster and theater set design, typography, and architecture, reflecting his training as an architect in Germany before World War I as well as the inspiration of Kazimir Malevich, a fellow teacher at the Vitebsk art school.

Emil Roth (1893–1980) was a Swiss architect and co-founder of the magazine ABC. He was also involved in the Werkbundsiedlung Neubühl project in Zurich and El Lissitzky's "Wolkenbügel."