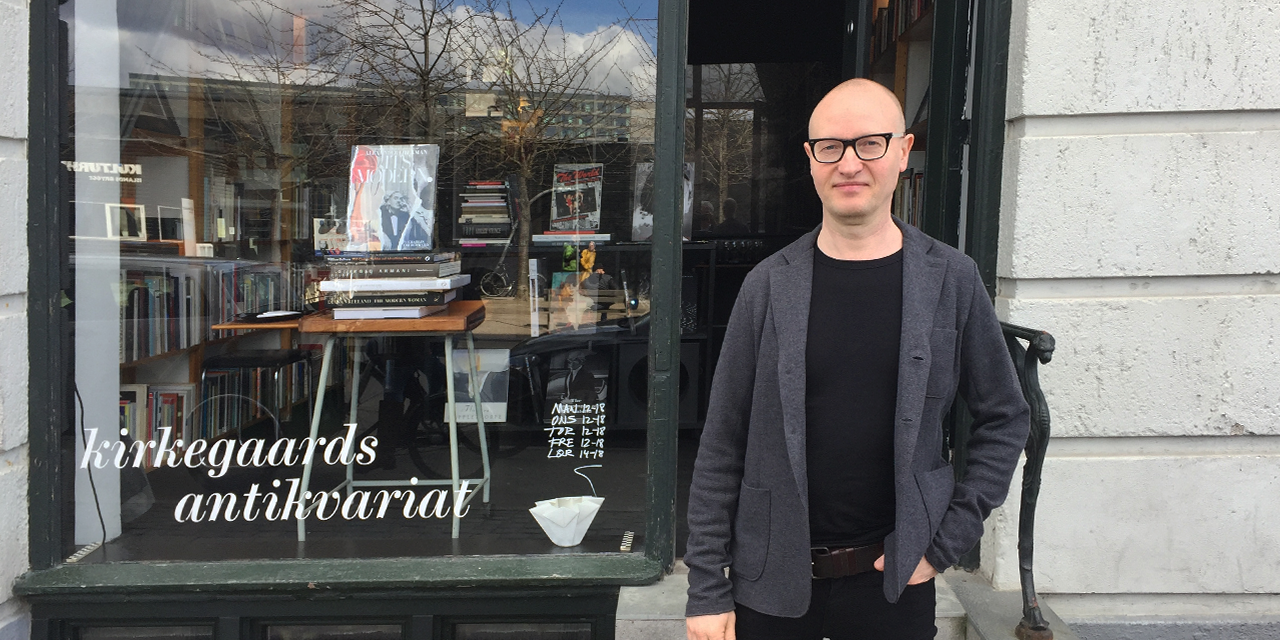 Tommy Kirkegaard, host of our first Nomadic Bookstore, tells us why he became a book’s person and a vintage bookstore owner. Learn more about him and how our cooperation came to life in our interview with Tommy.

Lars Müller Publishers (LMP): Hi Tommy! Before talking about how you became a vintage bookstore owner, could you tell us how the collaboration with Lars Müller came to life?

Tommy: As part of my venture into combining my stock of vintage books with selected new books I was already offering a couple of Lars Müller Publishers books. It was a great satisfaction to see these books were popular in Copenhagen as well and sold out quickly. Many of Lars Müller Publishers’ books, for example the books by Kenya Hara and Jasper Morrison, make great gifts for the young and creative audience. So, I knew the books would suit my customers.

After listening to a great interview Podcast from Formfunk with Lars, I noticed many similarities in the way Lars and I see books as a medium. He has huge knowledge of the tradition of book making and great care and admiration for books without being too nostalgic. Not everything has to be presented in a printed book, but if you decide to publish then you try to make the most out of it, passing on the real feel of books and creating something that has a staying value.

I also learned from this podcast that Lars Müller Publishers was thinking about doing some pop-up stores outside of Switzerland, maybe even in unlikely places. So I thought: why not ask if they wanted to come to Copenhagen and open a bookstore inside my shop over the summer? And to my great joy Lars paid me a visit earlier this year and said yes.

LMP: Thank you for the insight. Now tell us, how did you become a book lover? How did that influence your career choice?

Tommy: I have always, since childhood, been a “book’s person,” but never imagined myself running a bookstore as my father was a car mechanic and my mother unemployed and there were absolutely no books at home. As a child I borrowed many books from libraries – in huge amounts. It was a great way of escaping to better or more exciting worlds. That it could be a trade did not come into my mind at all.

After many detours I did, however, end up with a university degree in literature and semiotics in the 90s and at some point I also started collecting books. I worked part time in a local second hand bookstore but, as a student, did't have enough money to collect rare books. Then one day I walked by a removers company. They sold a complete library of beautiful books on art, philosophy, modernity and Modern First Editions. I first started buying books in plastic bags and carried them home, one by one to my tiny student rental. Soon I realized that I could not let one single book of this collection pass. So I borrowed some money and bought them all at once. It was completely hopeless. Suddenly I had books everywhere and no money at all, not for food, not for anything else. So I started selling. I had to.

It turned out to be kind of fun as well and I earned quite some money too. Little by little I got rid of most of the books I bought in the first place and somehow my need to collect books disappeared. I think the fact that I “got them all at once” – each book I was ever dreaming of was there! – I felt no more need to collect for myself. Now I only take books home occasionally. I still read a lot but only own very few books. I have them in my shop of course – for a period of time at least.

I think that experience helped me understand book collectors and I can give good guidance to buyers. I see myself as a facilitator of all sorts of books; I pass books on, from seller to buyer. For me that is a very satisfying way of living.

LMP: How did you become owner of your own bookshop?

Tommy: After finishing my studies I struggled to find work but eventually moved to Copenhagen in 1999 and found a full time job working as a salesman of rare books. I worked at Politikens Antikvariat for a while and later with Lynge & Son, which is one of the best antiquarian booksellers in Scandinavia. I learned a lot from working with these guys and the incredible rare books they sell. I also gathered experience from their international outset selling books all over the world. Then at some point I felt the urge to become self-employed.

It was 2005 when I became one of the youngest booksellers in the book trade in Denmark. Since I was better at using the possibilities of the Internet, I had an advantage over my older colleagues as I was thinking globally as well. I had reasonable success from the beginning on. It also helped that Internet sale of second hand books was booming. Later on it became more difficult to be a bookstore owner but I have managed to keep my small shop alive for more than a decade now and find it still thrilling to develop my shop further into becoming an even better bookstore with even better books.

In 2011 there was a major flooding in the area where my shop used to be – a shop in a basement. This resulted in a major financial and personal crisis. I was close to giving up and could have easily run just a web store but that wouldn’t have been satisfying. I realized that I don't want to do anything else but run my own bookstore.

When I started working as a bookseller and got my first shop one thing led to the other. After the flooding I realized how much it means to me to have a store, a real physical place where I meet people, friends and strangers on an everyday basis. That is really the most important thing to me and to me it seems a bookstore is the perfect place for that.

LMP: How do you find and select your second hand books?

Tommy: Sometimes I get donations but mostly I buy the second hand books from private people, who clean out their houses, are moving, changing their interests, need money etc. I buy single books and complete libraries. I also buy from colleagues all over the world on the Internet and on travels. At the beginning I also frequented flea markets but I haven’t had the time for that for many years now.

The most interesting books I often buy from private collections. For example, in the past I bought the libraries of some Danish photographers like Keld Helmer-Petersen, Gorm Valentin and Per Folkver and last year I had the pleasure to deal with a part of the collection of the artist Asger Jorn.

LMP: That's great! What is special about your store?

Tommy: My shop is located a little outside the city centre of Copenhagen near the waterfront at Islands Brygge. It is possibly the smallest bookstore in Copenhagen but I try to keep a stock of some of the best and most exciting books. I am very happy to have some of the best and most interesting customers, many regulars, of course, but also tourists, people passing by and from all over the world. I have a stock of around 2.000 books, vintage ones and some new books, artist books, books on design, architecture, modern literature – mainly Danish and English books but also some foreign ones from all over the world. I sell many rare and expensive books but there is something for all costumers. I sell books for a small budget too.

The book as a medium is the focus. The book has to be coherent in itself to be interesting. Some of my books are very rare and expensive but that is not what matters to me. Each book has to have something special to it.

Photo books are one of my main focuses and I have had some photography exhibitions in the shop over the last couple of years with the Swedish photographer Gerry Johansson being the most famous artist so far. I also host artist talks, poetry readings, book launches and music concerts; avant-garde jazz and experimental electronic music. Since I run the store by myself the programme also reflects my personality and some customers say it is like entering someone’s living room. It definitely has a personal feel to it. (sh)