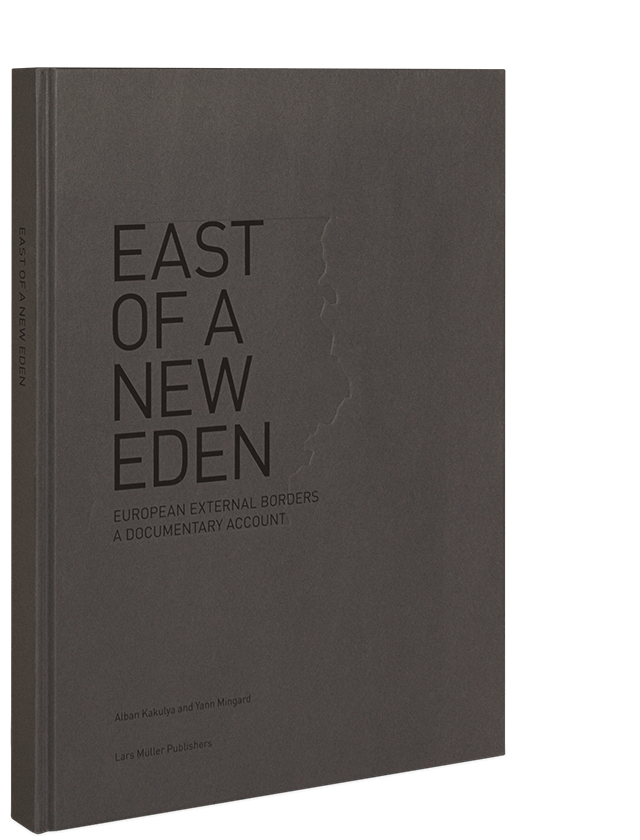 East of a New Eden

Europe’s new eastern borders stretch from the Baltic Sea to the Black Sea: 1.600 heavily guarded kilometers between former “fraternal countries.” The photographers Yann Mingard and Alban Kakulya spent a long time on the road; one of them traveled down from the North and the other up from the South in an effort to document the places and landscapes that mark the end of the Western world. On their journey, they photographed the landscape as well as the border posts with their soldiers and their refugees seized at the frontier, and documented a reality defined in faraway Strasbourg, Brussels, and elsewhere. Explanatory maps and satellite images are juxtaposed in this book with the striking photographs. Articles by political scientists, security experts, sociologists, human rights specialists, and philosophers, as well as literary texts round out this photographic survey of the EU’s Eastern European external borders.

Yann Mingard, photographer, studied at the Visual Arts Professional School, Geneva and the School of Photography in Vevey, Switzerland. He had several exhibitions in Switzerland, France, Italy, UK, USA and published in international magazines.

Alban Kakulya began his career as a photographer shortly after returning from Nicaragua where he worked as a street educator for drug addicted children in Managua during the 1990s. He then became a photographer and reporter for the Strates agency in Lausanne. During this period he made a report on the external borders of the European Union. This work has been exhibited in many countries and has been the subject of his book "East of a New Eden" (2010). After training as a journalist, he made other reports, including one on minors in prison in Central America. After being awarded a Fulbright scholarship for his artistic work, he left for the United States to study film. On his return he worked as a journalist for magazines and the radio and as a director for the national television and academic institutions such as the EPFL.